This article was previously published February 15, 2021, and has been updated with new information.

The tendency is to lose muscle as you age, a condition known as sarcopenia. If you don’t do anything to stop it you can expect to lose about 15% of your muscle mass between your 30s and your 80s.1 An estimated 10% to 25% of seniors under the age of 70 have sarcopenia and as many as half those over the age of 80 are impaired with it.2

Enforced bedrest, due to hospitalization, for example, can also have a dramatic impact on your muscle mass, even if you’re younger. According to a 2015 review3 in Extreme Physiology & Medicine, you can lose 5.2% of your muscle mass in the first two weeks of bedrest. By Day 23, you can have lost up to 10% of your quadriceps muscle mass.

Not only are strong muscles a requirement for mobility, balance and the ability to live independently, but having reserve muscle mass will also increase your chances of survival4 when sick or hospitalized. Since muscle is lost far more easily and quicker than it’s built, finding ways to continuously promote and maintain your muscle mass is of utmost importance.

The Crucial Role of NAD+

As reported by Science Daily,5 scientists recently discovered that Alzheimer’s-like protein aggregates underlie the muscle deterioration commonly seen in aging, and that nicotinamide adenine dinucleotide (NAD+) is essential for combating this condition.

Their study,6 published in the journal Cell Reports, showed that protein aggregates (amyloid) could be blocked by boosting the levels of NAD+, a biomolecule that is also essential for maintaining mitochondrial function.

Higher levels of NAD+ were found to turn on the defense systems of the mitochondria and restore muscle function. Aggregated proteins have long been thought to be a contributor to brain aging, and this study proves aggregated proteins also contribute to muscle aging.

“The most prominent component of these protein aggregates is beta-amyloid, just like in the amyloid plaques in the brains of patients with Alzheimer’s disease,” said Johan Auwerx at EPFL’s School of Life Sciences. “These abnormal proteotoxic aggregates could serve as novel biomarkers for the aging process, beyond the brain and muscle.”

The study points out that NAD+ homeostasis is required to maintain proteostasis, i.e., the regulation of protein creation, folding, trafficking and degradation. It turns out that boosting NAD+ in later life will reduce amyloidosis (the buildup of amyloid) and mitochondrial dysfunction.

The importance of NAD+ for healthy muscle function is also reviewed in “Sarcopenia and Muscle Aging: A Brief Overview,”7 published in the journal Endocrinology and Metabolism. The paper highlights:

As indicated by the Cell Report study, this Endocrinology and Metabolism paper highlights the connection between sarcopenia and mitochondrial dysfunction in both skeletal muscle and motor neurons.

People with sarcopenia have been found to have both reduced mitochondrial oxidative capacity and inhibited NAD+ biosynthesis, and several studies have proposed that mitochondrial dysfunction in your neurons actually drive the development of sarcopenia.8

NAD+ is a substrate for a number of important enzymes, including poly(ADP-ribose) polymerase (PARP) and sirtuin 1 (SIRT1), which is known as a classic longevity protein. NAD+ is also essential in metabolic processes such as creating ATP in your mitochondria. It accepts and donates electrons and is used in oxidation-reduction reactions in the mitochondrial electron transport chain.

When the NAD+ salvage pathways in muscle are impaired, mitochondrial dysfunction and decreased muscle mass ensues.

Interestingly, what scientists have observed is that NAD+ levels decline in most tissues over time, and is associated with aging in general and is therefore thought to play an important role in many age-related diseases.

According to the Endocrinology and Metabolism paper,9 researchers have shown that when the NAD+ salvage pathways in muscle are impaired, mitochondrial dysfunction and decreased muscle mass ensues.

NAD+ boosting molecules such as nicotinamide riboside (NR), nicotinamide mononucleotide (NMN), nicotinamide (a form of vitamin B3 or niacin) and nicotinic acid (niacin) have all been shown to protect against age-related muscle disease.

How to Boost NAD+

Of those four, NMN is my personal favorite as it activates the NAD+ salvage pathway. As explained by Siim Land in an interview I did with him, which also reviews the importance of NAD+ in COVID-19:

I’ve previously recommended the use of NR over NMN but have since changed my stance. NR used to be considered superior because no NMN transporter — required to get it into cells — had been detected. We now know there is such a transporter, which gives NMN the advantage as it’s also a more direct NAD+ precursor. 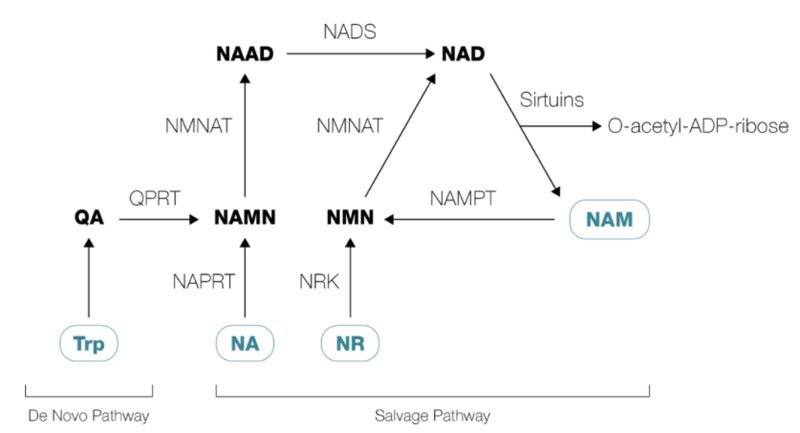 Most of the NAD+ precursor research is done with NR and that used to be my primary choice. However, as you can see from the image above, NMN converts to NAD+ whereas NR must first be converted into NMN before it can be converted into NAD+,10 so it makes more sense to use NMN for NAD+ augmentation.

The image above also shows how niacin (NA) also finds its way to become NAD+. Niacin is also a useful supplement to use in increasing NAD+ levels. You just need to limit the dose to about 25 mg, which most is a dose low enough not to cause any flushing. Higher doses are not likely as effective as NMN and exercise in producing NAD+.

The NMN transporter was discovered11,12 shortly before my interview with David Sinclair, Ph.D., a professor of genetics and co-director of the Paul F. Glenn Center for the Biology of Aging at Harvard Medical School. Interestingly, NMN is also Sinclair’s favorite NAD+ precursor.

Sinclair is generally acknowledged for bringing the importance of NAD+ to the world with his experiments at MIT in the late ’90s which connected NAD+ to sirtuin activation.

I believe one of the most effective ways of boosting your NAD+ level is to use NMN in suppository form, as this allows you to avoid most of the methylation of the supplement. Other alternatives include subcutaneous or intranasal administration, all of which are more effective than oral supplements.

As for the other NAD+ boosters, I do not recommend using high-dose niacinamide because in high doses it inhibits Sirt1, an important longevity protein. As mentioned above, low-dose niacin (vitamin B3) of 25 mg can be used.

Low doses of niacin, along with NMN in suppository form — both of which are precursors to NAD+ — are typically sufficient. As an added boon, raising your NAD+ also appears protective against severe COVID-19. There are also NAD+ supplements available, but their price tags can be prohibitive.

Lifestyle Strategies Can Address Underlying Cause of Low NAD+

While supplements such as NMN can certainly be helpful, if your NAD is low, your best bet is really to address the underlying cause. The good news is that this can be done through simple lifestyle strategies such as exercise, sauna bathing, fasting, realigning your circadian rhythm and minimizing electromagnetic field (EMF) exposure.

One of the reasons exercise, heat exposure and fasting work to address low NAD+ levels is because they are catabolic stressors that activate AMP protein kinase (AMPK). AMPK, in turn, activates an enzyme called NAMPT, which governs the NAD+ salvage pathway.

Blood flow restriction (BFR) training can be particularly beneficial in terms of exercise. It has been shown to naturally increase your NAD level and is very safe for the elderly.

Your circadian rhythm, meanwhile, plays a role because it is controlled by longevity genes called sirtuins, SIRT1 in particular. If your circadian rhythm is misaligned, then sirtuins are not expressed, which in turn inhibits NAMPT, thereby shutting down your NAD+ salvage pathway.

Oxidative stress and inflammation also use up and deplete NAD+, and exercise, sauna and fasting all help to reduce these. As a result, less NAD+ is depleted. So, these strategies not only improve your NAD+ production, but also reduce your body’s NAD+ consumption. The end result is a higher NAD+ baseline.

EMF exposure, which is the topic of my book “EMF*D,” is one common source of oxidative stress, so it too increases your NAD+ consumption. It does this by activating PARP, a DNA repairing enzyme. Each time PARP is activated, it uses up 150 molecules of NAD+. Hence, reducing your EMF exposure can also be an important strategy to preserve and protect your NAD+ level.

Your body also uses up NAD+ to detoxify alcohol, so if nightly drinking is part of your routine, consider giving it up. To learn more about how healthy lifestyle strategies such as the ones mentioned here can improve your NAD+ level, consider reading through the paper “Healthy Lifestyle Recommendations: Do the Beneficial Effects Originate from NAD+ Amount at the Cellular Level?”13

NAD+ Is a Crucial Antiaging Component

So, to summarize, raising your NAD+ level and keeping it high has many important health benefits, from supporting mitochondrial function, which is crucial for general health and longevity, to protecting against severe COVID-19 and age-related muscle loss.

The great news is that this can easily be done by implementing the healthy lifestyle strategies reviewed above — exercise, sauna, fasting and recalibrating your circadian rhythm — while simultaneously avoiding things that deplete your body of NAD+, such as EMF exposure and excessive alcohol consumption. On top of that, supplements such as NMN together with normal doses of niacin can help boost your NAD+ in the short term.

Leaked Documents: Officials Are Hiding What Happened in Wuhan

We will be happy to hear your thoughts

We have curated the best Beauty, Fitness , GYM , Diet , Electronic  products all on one site for quick new product discoveries and easy shopping. We hope you enjoy the site. Sign up to learn about new products and fun holiday gift ideas

This page contains affiliate links that at no additional cost to you, we may earn a small commission. This site is a participant in the Amazon Services LLC Associates Program, an affiliate advertising program designed to provide a means for sites to earn advertising fees by advertising and linking to Amazon.com